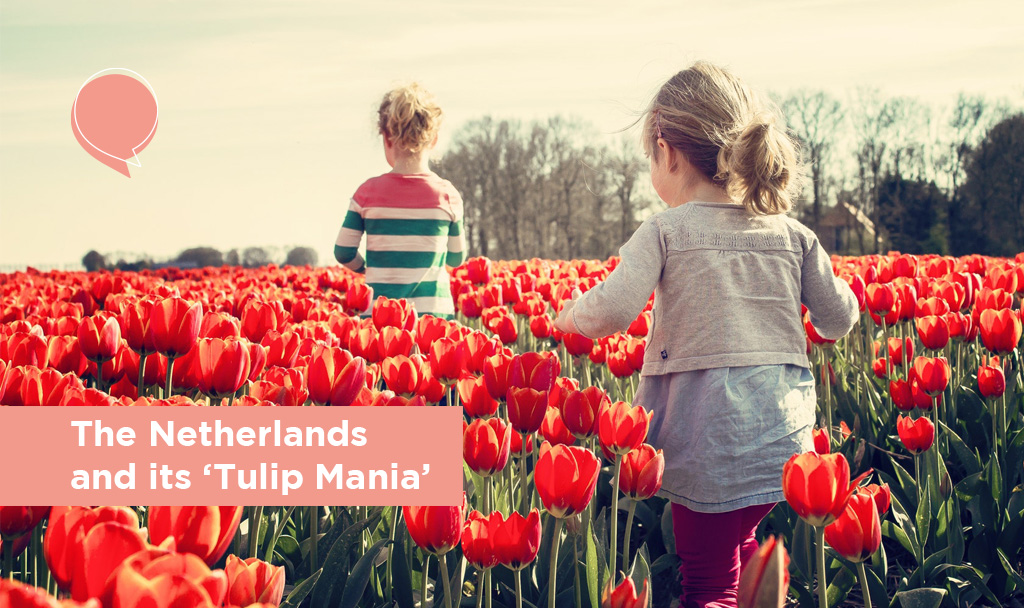 The Netherlands and its ‘Tulip Mania’

A couple of days before the publication of this blog post,  the ‘Keukenhof’ will have once again opened its doors, after a long winter break. And when I say ‘Keukenhof’ (pronunciation: [ˈkøːkə(n)ˌɦɔf]), I also say ‘one of the best known Dutch tourist attractions’. It is known as ‘the garden of Europe’, and it is one of the largest flower gardens worldwide. In this vast park you can find a zillion flowers on display, most notably tulips, and there’s other attractions as well, to keep you (and your family) well amused for a day. This reopening of the Keukenhof offers a nice opportunity to look at this feature that the Netherlands are so well known for: their tulips.

Let’s start with some info about tulips themselves. The tulip is a bulbous spring-flowering plant of the lily family. Tulips are actually remotely related to onions. Tulip flowers are usually boldly colored and cup-shaped. Most tulip flowers are remarkably symmetrical.

While tulips are very popular in the Netherlands, they do not originate here. As far as can be traced back, they originate in the Tien Shan mountain range, in Central Asia. Before they made their way to north-western Europe, tulips were already being cultivated in the Ottoman Empire for a long time. Tulips were exotic plants here and Western Europe soon became fascinated by them. They were officially introduced in the Netherlands at the end of the 16th century.

Around that time, Carolus Clusius (which is the latinized name of Charles de l’ Écluse, in other words ‘Charley from the Sluice’), a famous Flemish botanist, was made the director of the Hortus Botanicus in Leiden (speaking about ‘nice places to visit’). He was hired by Leiden University to research medicinal plants. During his time there a friend of his sent him some tulip bulbs, for his garden in Leiden. And that, according to history, ultimately became the start of the bulb fields in the Netherlands. Those tulip field are still largely located north of Leiden. Not only because that was their starting place in the Netherlands, but also because the soil in that particular area behind the dunes is excellent for growing tulips, and other bulbous flowers.

Soon tulips had both stolen the hearts and the minds of the Dutch. The hearts in the sense that they did indeed fall in love with them, and the minds in the sense that the Dutch soon realized that this lovely flower would make good business and a great export product. As a result, tulips became in high demand. And because of that, during certain times, prices skyrocketed. And that had a self-amplifying effect: because tulips were expensive, they became a way of showing-off your wealth, so the rich went after them, so prices rose even more, and so on. The peak moment of this development were the years of the so called ‘tulip mania’, between 1634 and early 1637. At the peak of the tulip mania, just before prices fell sharply in February 1637,  a single tulip flower might sell for a price equivalent to ten times the annual salary of a skilled artisan.

At that time related activities were also deployed. For instance: a Delft Bleu ceramics factory (the nice old city of Delft is not very far from Leiden) produced and sold specially dedicated tulip vases. Those vases by themselves would cost a small fortune. All in all: among economists, the years of the tulip mania are still regarded as the first known speculative economic bubble in history.

Since then matters around tulips have more or less settled down. But tulips have remained both highly appreciated to have in the house and a lucrative commodity, locally and for export. And that goes both for the bulbs (that are being shipped all over the world) and for the flowers. In order to fully mature, a tulip bulb needs to already produce a flower once. Only then is it ready for export. So: no matter how lovely they are in their own right, for some tulip bulb producers the flowers are only a by-product of the bulbs they are selling.

This year the Keukenhof gardens are open from March 24th till May 15th. See their website for more info and tickets.

Especially this time of the year you can find tulip flowers in all shapes and colors in every market and flower stand in the country. For information on how to properly care for freshly cut tulips see this WikiHow page. And should you want to grow tulips in your own garden, this page provides you with your essential need-to-knows.