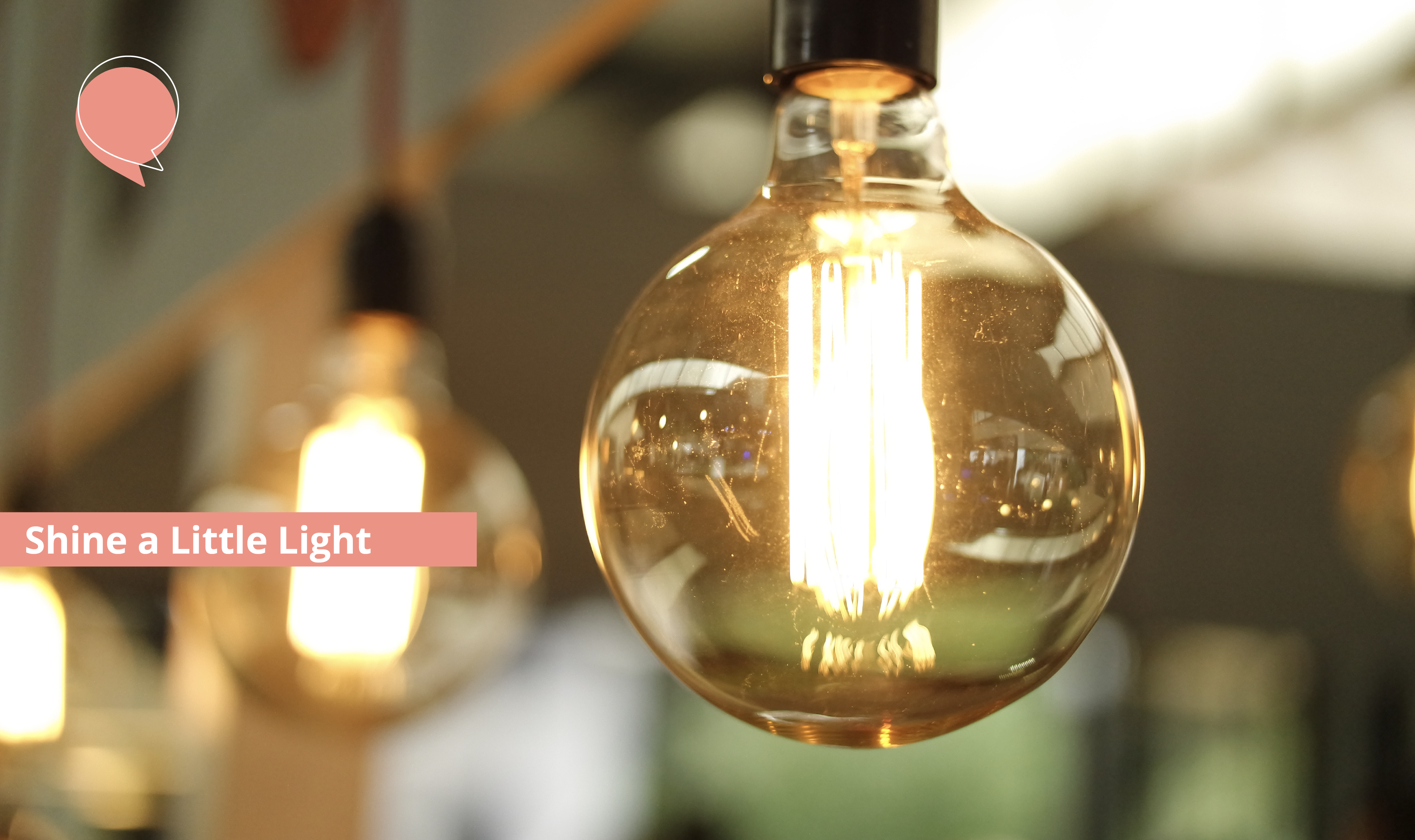 If, in the last weeks, you have spent any time at all in Eindhoven during the evenings, it can barely have escaped you: the many hundreds of light objects along many streets, that together make-up the yearly ‘Lichtjesroute’ through Eindhoven. In this edition of my blog, I will present a bit of historical insight into this very ‘Eindhoven-like’ tradition. And obviously encourage you to explore the route yourself, should you need any encouragement at all.

The ‘Lichtjesroute’ (Route of Lights) is an annual event held in Eindhoven in the fall, beginning September 18. With it, Eindhoven commemorates the liberation, by the allied forces, from the Nazis. The purpose of the Route of Lights is to perpetuate the memory of the liberation, depicting ‘remembrance’ and ‘freedom’. But also the illusion of ‘fairy tales in light’.

In the May days of 1940, the Netherlands was overrun by Nazi Germany. That was the beginning of an occupation that would last for a large part of the country for 5 years, until May 5, 1945. However, the south of the country, the part below the great rivers, was liberated by Allied troops more than six months earlier. The liberation of Eindhoven took place on September 18, 1944. 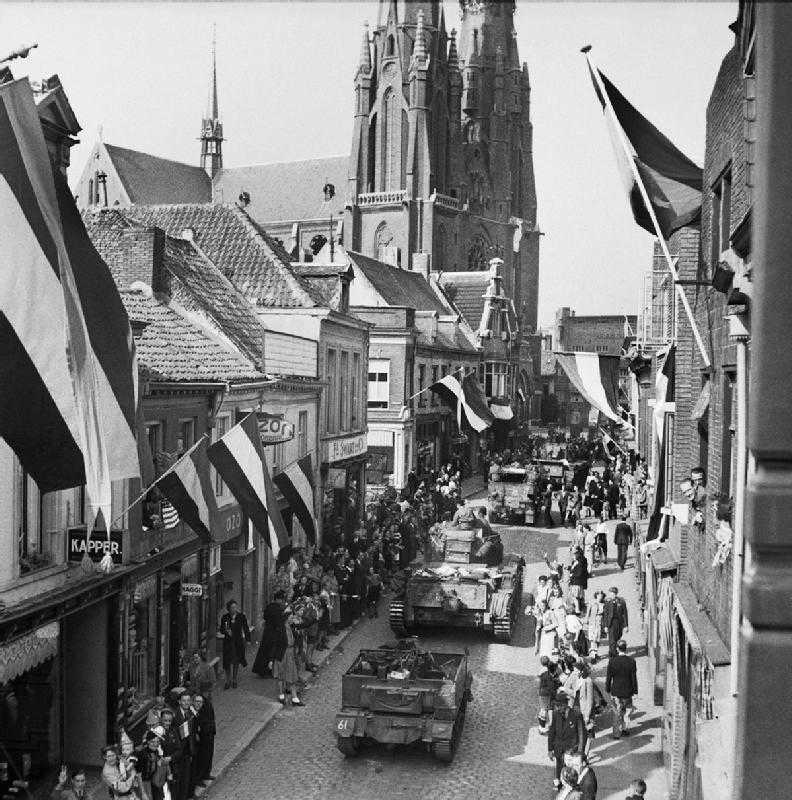 If you know anything about Eindhoven at all, it should come as no surprise that Eindhoven chose ‘light’ as the medium in which to express its joy about the liberation. And I am not talking about ‘light as opposed to the dark years of the occupation’. Eindhoven is known as ‘the city of light’ even from before the coming of the Philips light bulb industry, as I explained in an earlier blog post in this series.

Already at the first commemoration of the liberation of Eindhoven, a ‘Festival Committee’ was formed. The intention of this committee was to add extra luster to the festivities with light. The people of Eindhoven were called upon to cooperate by adding light to their houses. Because materials were scarce so soon after the war, a candle in front of the window or a grease pot outside was the obvious solution.

From 1947 on, the approach was more professional and the ‘Liberation Remembrance Foundation’ took on the coordination of all liberation activities, including that of the Lichtjesroute. At various locations in the city, the so-called ‘Fire Points’, festive lights were lit for four days between 8 p.m. and midnight. Over the years, the number of Focal Points grew steadily. And in 1969, 25 years after the liberation, the length of the route was no less than 40 km. For the next 15 years, that 1969 route would be the last one.

In 1984 a number of enthusiasts thought it was more than time to revive the Route of Light tradition. A mailing asked 1,000 businesses for financial support. And through the local media, volunteers were sought to help realize the ‘new’ Route of Light. Over the years, new objects were introduced, although some of the original ones are still on display, like the parachutes and the peace doves. And obviously, gradually the original incandescent light bulb were all replaced by LED ones.

The Lichtjesroute as it is designed since 1984 consists of a route through the center of Eindhoven, and through the districts of Stratum, Strijp, and Woensel. Because the route is about 22 kilometers long and is especially popular with small children, many people follow it by car. However, consideration has also been given to cyclists who want to ride the route (you will enjoy it much that way, if you ask me!).

Already during late summer, you can see the first signs of the upcoming Lichtjesroute, if you know what to look for. A large group of enthusiastic volunteers starts working all across the city, to make sure that everything will once again work perfectly, as of September 18th. 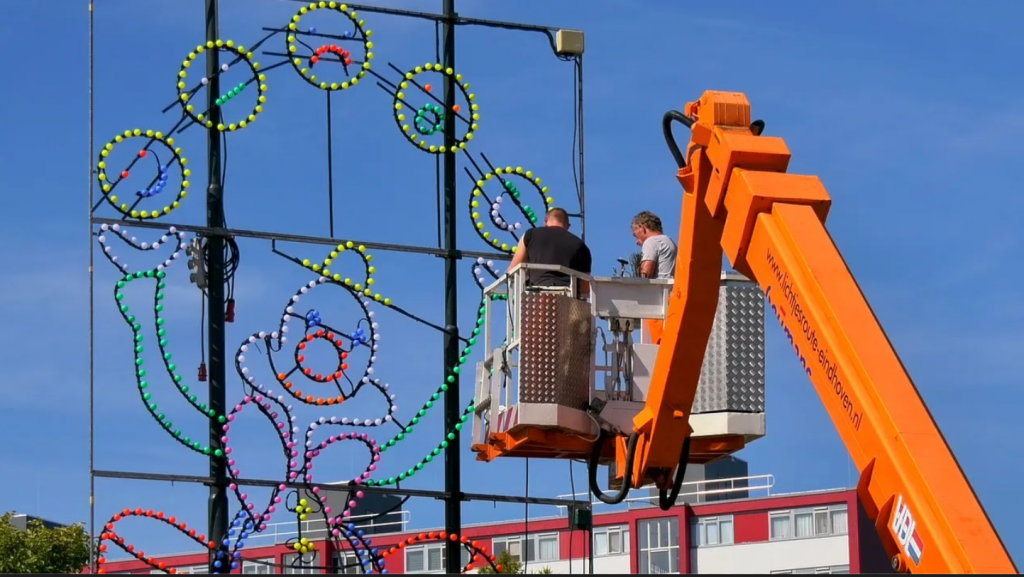 It is midsummer, and the volunteers already start working on the next edition of the Lichtjesroute. Source: Studio040

The route is indicated by reflective “pointer” signs showing an arrow and a red image of a light bulb. Some pointers have the text “bicycle route,” to indicate that cyclists should follow an alternate route there.

Along the route, frameworks are attached to lampposts to which lights are attached, in the shape of various objects and animals. Usually several types of light shapes that share a common theme are placed together – for example, all the animals together.

The placement of the shapes varies from year to year, but in some places the same shapes are hung back every year. For example, crescents always hang in de Halevemaanstraat’ (Crescent Moon Street), and in the quarter of Vaartbroek, you can find all sorts of celestial constellations, because the street names there come from Greek and Roman mythology, that in turn gave their name to constellations.

In the neighborhood “het Witte Dorp” (“the White Village”), no frames hang, but red, white, and blue lights are placed on the bay windows of the white houses that shine on the white walls. With that red-white-blue, the colors of the Dutch flag are depicted.

I can say a lot more about this all, but then again: what better way to explore this activity than to actually just ‘do’ it! I warmly invite you to take the Lichtjesroute, somewhere in the days to come. You will have till October 9th to do so. At least this year. Personally, I would do it by bike, to get the best of it all. Then again: I’m quite aware that I am Dutch. Rumor has it that we are actually born on two wheels 😉 🚲 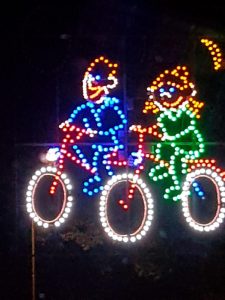 More info, including a map and an audio tour (also in English) available on the website of the Lichtjesroute.

The Dutch and Time
A Look at the Dutch Cycling Network
VISIT For More Tips, Trips, and Stories From Our Community