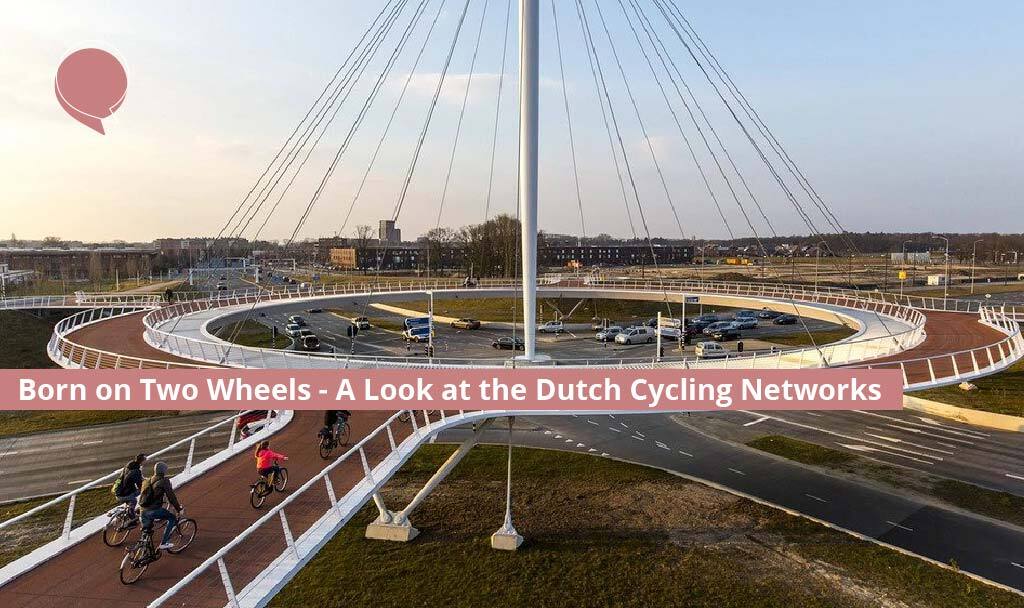 Born on Two Wheels (About the Dutch grid networks)

Several years ago I once sat in an airplane, on a homeward bound flight to Schiphol Amsterdam Airport. The man in the window seat next to me was a first time visitor to the Netherlands. As the plane descended towards the airport, and the landscape below became more and more visible, he looked out of the window and said: ‘Om my goodness! That is the biggest pool table I ever saw in my life!!’ This little anecdote suffices to make the point that, yes, the Netherlands are largely a flat country. And green, obviously.

The low lying aspect of the country is actually embedded in the name, with ‘nether’ being late medieval English for ‘low’. In Dutch we have a similar word: ‘neder’ . Although somewhat old fashioned, it means the same. ‘Ik leg mij neder’ (usually now written as ‘neer’) means ‘I lay myself down’. You can still find the word in the Dutch ‘nederig’, which is still in use. It means ‘humble’. Please note that the Netherlands is plural: the Low Countries. At the time the name was given it also applied to the western part of Flanders.

There is a lot more to say about the Low Countries being so low. And I might very well do so in a next blog post. But for now it was merely an introduction to the topic of this month’s post: the numbered grid networks that we have in this country. This flat character of the Dutch landscape makes it very suitable for walking and cycling. The latter even to the extent that we have more bikes than people. According to the statistics office of the Dutch government, our population of somewhat over 17 million people shares 22.8 million bicycles. Because many people have one for sports and one for transport. Some jokes in the expat literature about the Dutch people have it that we are actually ‘born on two wheels’.

Bicycles fulfil more than one quarter of our overall transport needs. Many visiting internationals are heavily impressed by our bicycle infrastructure. The Netherlands boasts a finely meshed network featuring 35,000 kilometres of (fast) bicycle tracks to go from A to B, but also for recreational purposes, with the nearby ‘Hovenring’, that almost seems to be floating in mid-air, among the more spectacular examples.

Now that the weather is (finally) shaping-up a bit: if you are looking for a nice activity, whilst simultaneously getting to know the Eindhoven area a bit, the so called ‘numbered grid points’ (‘knooppunten’) networks in the Netherlands, may just be your thing. And the grid networks may also provide you with an excellent activity that you can perform in a small (corona proof) group.

There are now numbered grid networks for cyclists, for walkers and here and there also for horseback riders. As far as I could trace back, the grid networks once started in the 80’s of the previous century for cyclists, in the Belgian province of Limburg, in the wake of the closure of the coal mines there. With the goal of bringing nature and (the often unemployed sitting at home) miners closer together. And to lure the latter to get out of the lazy chair and move.

The routes are often a bit longer than the ‘usual’ ones, but there’s a big benefit in return, because they take you through the most beautiful landscapes where possible and via the more low-traffic routes. And anyway, you often cycle or walk the longest route from A to A anyways. But that’s what it’s all about.

You can pick-up the regional network at many places in Eindhoven, and move in any direction from there, all the way into Belgium or Germany, should you desire so. As an example: some grid points near Eindhoven central train station: 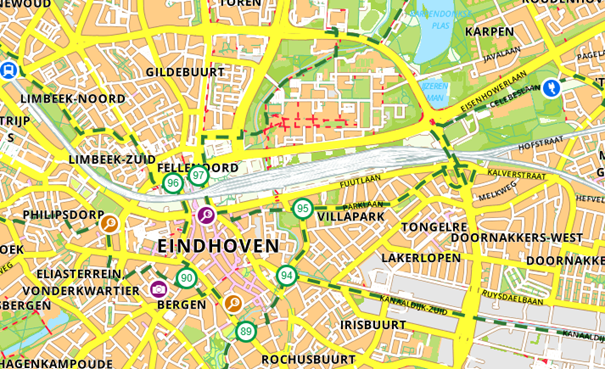 Several apps (like ‘Route.nl’) can help you design your own routes, save them and navigate them from your smart phone. Or you just write down a bunch of numbers on a sheet of paper, obviously. Google Maps is more or less OK for bikes but does as yet not take the (complete) grid network into account.

If you do use your phone for navigation, make sure to have a fixed holder for your phone on your bike, as in the Netherlands, for good safety reasons, you can get a spicy fine for cycling while simultaneously holding your phone in your hand.  If you get enthusiastic and start riding longer tours, having a little power pack with you can come-in handy, as the GPS navigating comes with a relatively heavy battery use of your phone.

For cycling you can find more info at for instance www.holland-cycling.com and enter ‘numbered cycle networks’ in the search window. 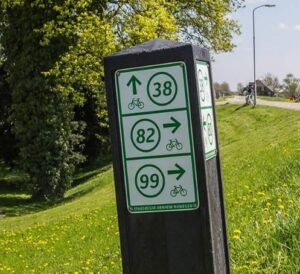 Example of a Trip

Late October 2020 I took a little trip south of Eindhoven. 21 kilometer, just to manage your expectations.  And at an intersection between grid points 52 and 79 in the route above is a point where you can see all the different grid routes come together: for walking, for cycling and for horseback riding:

The ‘mushrooms’ in the countryside

If you’d like to take a less detailed approach and just like to cycle from village to village, you can also follow what the Dutch call the ‘paddestoelen’, after their shape (literally ‘toad seats’, or mushrooms) that guide you from place to place. Usually you only find them in the country side, not in the cities. They are much older than the grid networks:

Just one more thing. Sometimes a particular sign tells you that an area of land is closed-off for visitors, because it is a nature preservation area. I found a sign like that near the same intersection. Sometimes such a sign has a particular period of the year underneath (like the months of the birds’ breeding season). If it doesn’t, like this one, it applies all year.

I have not been able to find info for the walking grid network in English. If you want to practice your Dutch, or use a translator, this site can get you start walking, though. The aforementioned route.nl also plots walking routes.

PS: In times of corona you’d do wise to bring your own food and drinks, as some the cafés and restaurants along the routes are closed (at time of writing), or need a reservation in advance.