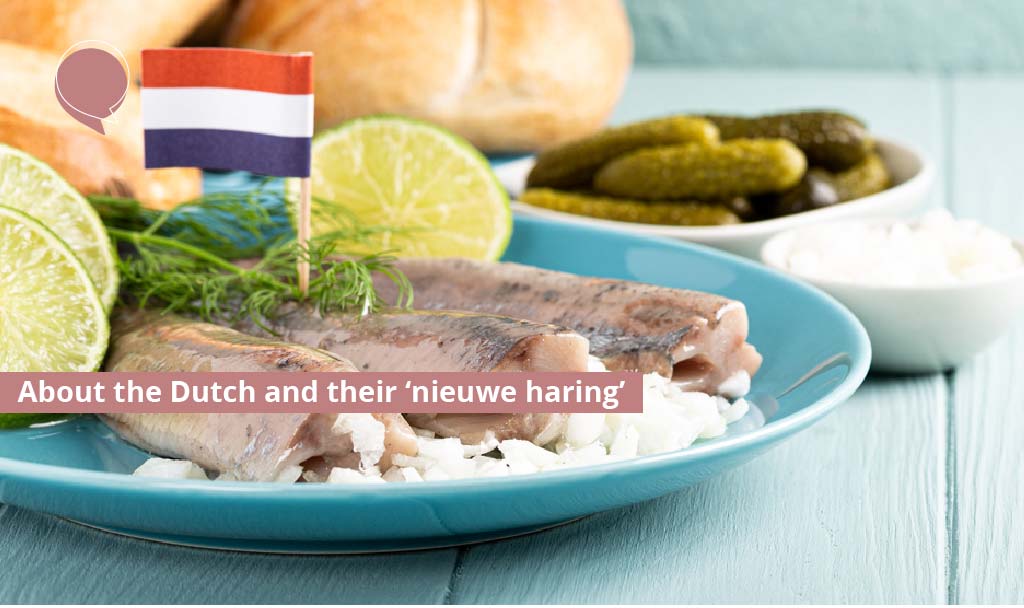 ‘Now that is a bit fishy!’ – About the Dutch and their ‘nieuwe haring’

In this edition of the ‘We are not alone’ blog I’d like to talk a bit about food with you. More precise: about a very traditional Dutch delicacy. Now I am quite aware that talking food, and especially delicacies, in the capacity of being a Dutchman, amounts a bit to stepping on a slippery slope. For principle reasons some of my international friends and colleagues refuse to use the words ‘Dutch’ and ‘cuisine’ in one and the same sentence, because they believe that, at a very fundamental level, the two concepts do not go together 😉

Other than saying ‘hey guys, wherever you will go, it will never taste like ‘home’, I will choose my battles, for now, and let this be. But I kind of guess that I’ll be back with a posting about traditional Dutch food as we approach the winter once again, global warming allowing. Because what is known as ‘the traditional Dutch dishes’ are more of a winter type of food anyways.

There is however a meaningful exception to this: a dish that is inextricably linked to exactly this period of the year. And I’m telling you: it won’t get any more Dutch than this. I am talking about ‘nieuwe haring’! In other words: fresh (and yes, indeed: a sort of raw, or at least uncooked) herring.

As the expat website dutchreview.com once put it – “This true Dutch delicacy is difficult to explain, even for the veteran herring-enthusiast, without having tasted it. The herring, obviously, is a fish. The Dutch serve it by cleaning it out and then storing it in brine (a saltwater solution) for some time until it’s at least cured to ‘Hollandse Nieuwe’-standard, which is the freshest, newest batch of herring every Spring. The brine makes the fish soft and very salty – bringing out a strong fishy flavor. And when we say salty, we mean salty”!

Herring has been a staple food in the Netherlands since the Middle Ages, Historically, a considerable part of the Dutch economy revolved around fish trade. And as herring moves in large schools around shallow coastlines, it’s relatively easy to catch too.

Depending a bit on the weather, what is of old called ‘nieuwe haring’ (new or fresh herring) is caught somewhere between late May (when the fish has grown fatty enough) till the end of June (after which it will get too fatty to taste nice) and thus can be eaten some weeks later, so from early June to late July. Having said that: the brining and modern cooling techniques make the herring available year round. Although the traditional Dutchman will tell you that nothing beats the real new herring. In other words: get it now!

Since long, herring is connected with some traditional Dutch rituals. One of them being ‘vlaggetjesdag’ (little flags day). Of old that was the day, somewhere after mid-May, before the ships would set sail to go and catch the first herrings of the season. The ships would be decorated with thousands of little flags, and be on display in their havens.

Being born and raised in the city of Delft, near the coast, I can still remember that, as a child, my parents would take me to the village of Scheveningen, which has one of the largest flotillas of fishing boats in the country, to see the decorated ships. The day after, the ships would sail to sea, and the first one to return loaded with herring would win that year’s ‘herring race’. Since then, however, the tradition has changed a bit, and now ‘vlaggetjesdag’ marks the bringing to shore of the first new herrings of the season.

Another Dutch ritual surrounding the herring, is how it is actually being eaten. A true ritual indeed, and it may take a bit of practicing. The cleaned herring is taken-up by the tail, dipped in fresh, chopped onions, and more or less gobbled down, as demonstrated for instance in this video. In honesty: an experienced sea gull would envy the Dutch here, for their technique.

If you have never tried it before, I would definitively like to invite you to try it, if only for once in your life. As said before: it won’t get any more Dutch than this. There is people who love it (like yours truly) and people who don’t, and I have learned over the years there are not many people in between.

My recommendation would be that you go to a decent fish stand in a market place, and have it there and then, rather than having the vacuum sealed ones from the supermarket. I’m confident there’s nothing wrong with the latter, but other than that, there’s nothing right either: it’s not the real stuff.

My grandmother used to say: ‘A herring a day keeps the doctor away’. Meaning to say that herring is a healthy thing to eat. And actually there is some current day evidence for that. Up to the point where some nutritional recommendations now include eating fatty fish (like herring, or mackerel or salmon), at least once a week.

When my grandmother said that, she also spoke of something that she could afford. At the time herring was looked-down upon a bit, and labeled ‘the poor man’s steak’. Grandma did not have much money to spend, and on what little money she had, a large family had to be raised. But she also was a real herring lover, and in that respects, as in some others, I resemble her.

Since then things have changed significantly. Steaks have grown cheaper as a result of mass production agriculture techniques. And fish, including herring, have become more expensive.

Nevertheless, whether you will have your first herring soon, or you are already a serial offender like me, and whether you will or will not have it with a traditional little shooter glass of ‘jenever’ (Dutch gin), straight from the freezer: here’s to your health!!