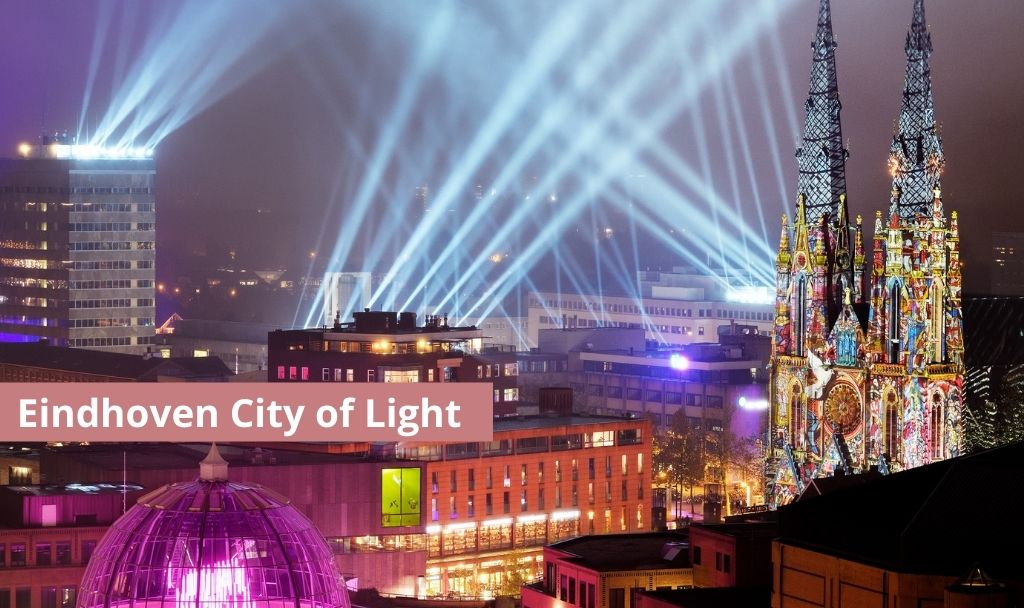 When this blog post is published, we are in the middle of the Glow festival (November 6th through 13th). In case you haven’t heard of it before, Glow is an annual festival, during which the city of Eindhoven invites artists from all over the world, ‘to do something with light’. This is the 16th edition of Glow, and the leading theme this year is ‘Moved by Light’.

The combination of Eindhoven on the one hand, and ‘Light’ on the other is no coincidence. Eindhoven has in common with the French capital Paris that they are both called ‘the city of light’. So, on the occasion of Glow, let me shine a little light on Eindhoven and on its history.

If you go back just a little over a hundred years in time, what we now know as ‘Eindhoven’ consisted of 5 villages plus the small city of Eindhoven in the midst of them. Industrial activities at the time centered around tobacco (cigars) and textiles. This part of Brabant was favorable for these sort of industries. Cigar making, for instance, was all manual labor, back then, so very labor intensive. Brabant was a roman Catholic part of the country, and that came with comparatively large families. Of old all farmers sons and daughters were needed to keep the little farms going, but when the mechanization of agriculture started that was no longer the case. The result: a lot of unemployment, meaning: cheap labor.

It was the foundation of the light bulb factory of Philips (initially manual labor!), followed by its rapid expansion into what we now know as Philips Industries, together with the coming and growth of DAF Trucks that spurred an enormous growth of the population. Since the locally available work force soon could not deliver all the hands that were needed, the companies started attracting thousands of workers from further away. Those workers needed to live somewhere, with a massive building of houses as a result.

As the City of Eindhoven was still confined to its medieval limits at the time, these developments called for radical changes in administration. In 1920, the five villages of Woensel, Tongelre, Stratum, Gestel & Blaarthem, and Strijp were incorporated into the new Groot-Eindhoven (“Greater Eindhoven”) municipality. The prefix “Groot-” was soon dropped.

City of light
Obviously the lightbulb factory of the brothers Anton and Gerard Philips was more than happy to advertise the title ‘City of Light’ for Eindhoven, the home base of their rapidly expanding light bulb factory. But the title is actually older than Philips Industries. From the second half of the 19th century onwards Eindhoven had a thriving match making industry.

The match factories found a favorable environment here, due to a combination of the existing cigar making industry and the presence of a lot of trees nearby that offered the right sort of wood for matches. And it was the match industry that had already delivered the honorary title of ‘City of Light’ to Eindhoven.

Eindhoven has not only grown rapidly in the number of inhabitants. It has also grown ever stronger into its current role as the beating heart of the Brainport region. It’s relatively small size notwithstanding, it has become one of the world’s leading capitals of technology, innovation and design.

So, if you take your Glow tour(s) this week, you’ll have the opportunity to submerge yourself wholly into this true city of light. Enjoy!

The website of the Glow festival 2021 can be found here. If you want to delve deeper into the history of Eindhoven, you can start with the Wikipedia page of the city. And the Historical Atlas of Eindhoven will make an excellent follow-up of that. I’m sure it can be bought online, but let me make a case here for the local bookstores in town.

The Dutch and Time
A Look at the Dutch Cycling Network
VISIT For More Tips, Trips, and Stories From Our Community