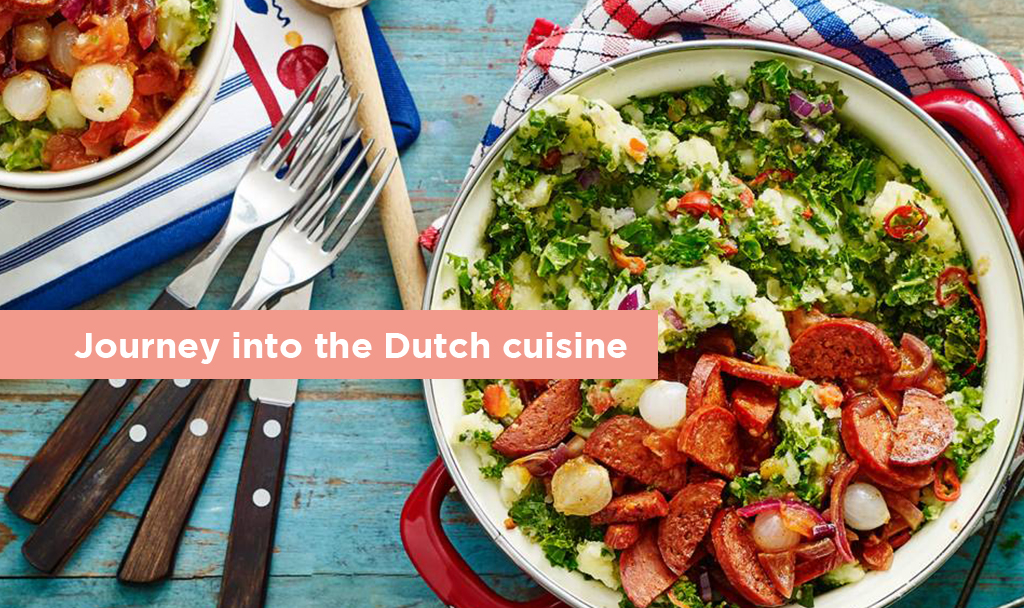 About some traditional Dutch dishes

In an earlier blog posting (about the Dutch and their ‘nieuwe haring’, July 2021), I promised to get back to you around this time of the year, to say a bit more about traditional Dutch dishes. This timing makes sense, as those dishes are often a bit more solid, a ‘winter type’ of food. So, here is a short introduction into Dutch ‘stamppotten’ and into some traditional soups. I will not go into detailed recipes, other than providing links to some. I rather hope to inspire  you to find some more yourself.

Before we look at the dishes themselves, though, I’d like to go into how people across different cultures talk about food. As an introduction to that: one axis along which you can compare different cultures is the axis from task oriented cultures on one side to (more) relation oriented cultures on the other. Obviously both come with their own strengths and challenges. I kind of guess I won’t blow you away in utter amazement when I tell you that the main Dutch culture is a relatively task oriented one.

Over time, people have noticed some interesting differences between task oriented cultures and relation oriented ones regarding how people talk about their food. At the risk of stereotyping a bit: generally in a task oriented culture, when people talk ‘food’ they talk ‘fuel’. The emphasis in the conversation is on the nutritional aspects of the food: will it keep ‘the engine running’, is it good for your health or not, will you get fat on it or slim? Especially in a work related context, the food hopefully is a bit practical to eat and that eating will not take too much time. The archetypical quick sandwich is a textbook example of this. Some actually prefer to wolf it down behind their computers, while conveniently still having one hand available to answer some emails.

In a relation oriented culture, on the other hand, when people talk ‘food’, they talk ‘fun’. The emphasis here is on socializing, on enjoying and on the social bonding that comes with eating together. And that also applies in the work context. You take your time for a proper work lunch, because, other than being nice and relaxing, it is good for the team building and for generating new idea’s. A close to three hour lunch, accompanied by a bit too much beer or wine to still allow for a productive afternoon in the lab or in the office, is a text book example from this side of the spectrum.

Traditional food = local ingredients
Today I will not be surprised if I simultaneously find on my breakfast table kiwi fruit flown-in from New Zealand, accompanied by papaya’s from Brazil, some fresh Alaskan salmon and a nice Greek feta cheese. However: that is a very recent accomplishment (‘Ouch’, says the Climate Crisis, by the way ☹). But, no matter where you’re from: when you talk about ‘traditional food’, you are bound to have food made of products that could be grown or bred locally. Say: no more than one day travel by foot or a horse drawn cart to the local farmer’s market. And of some ingredients that could be preserved by drying or fermenting them. And the traditional Dutch dishes are no exception.

As an example: you will find quite some traditional Dutch recipes that include potatoes and/or onions. They grow great here. But not with garlic, just to mention something, as the latter traditionally wouldn’t grow that good here. It might be a nice little exercise to look at the traditional recipes from the place that you are from. You’ll probably discover that they’re made-up of ingredients that thrive in the area close by. And, interestingly: you currently see a renewed interest in ‘buying local food’, indeed partly inspired by the climate crisis. See for instance the (Dutch) website destreekboer.nl (‘the local farmer dot nl’).

And this finally brings me to the Dutch stamppotten and traditional soups. By now you’ll understand: they’re all made-up of traditionally local ingredients and designed to keep you well fed through the day.

As you can find in Wikipedia: “Stamppot (English: Mash pot) is a traditional Dutch dish made from a combination of potatoes mashed with one or several vegetables. These vegetable pairings traditionally include sauerkraut, endive, kale [known in Dutch as ‘farmer’s cabbage’], spinach, or carrots and onions. The combination of the latter two is known as ‘hutspot’ in the Netherlands and as wortelstoemp in Belgium. […] Stamppot is usually served with sausage (in the Netherlands often smoked, in Belgium more often fried), julienned bacon, or stewed meat”. Increasingly you will find vegetarian variants of these dishes.

When you start looking into recipes, you’ll find hundreds of slightly different recipes for the same dish. Those variants are often handed down from one generation to the next: “My grandmother would use such and such ingredient”; ‘Oh did she? Mine would put this or that in”. And that makes this area only more interesting. Some starting points for your reconnaissance are recipes of ‘Hutspot met klapstuk’, ‘stamppot boerenkool met rookworst’ (kale, indeed, with smoked sausage), stamppot zuurkool (sauerkraut) or stamppot andijvie (endives).

There are also some very traditional soups, that still regularly make it to many Dutch dinner tables, especially in this time of the year. Once again you have, as the Dutch call it, an ‘eenpansgerecht’ (a ‘one pan dish’), but now in the form of (rather solid) soups. The most well-known examples are ‘erwtensoup’ (a soup made of split, dried peas) or ‘bruine bonen soep’ (brown beans’ soup). I’ll stop providing more examples, as it might spoil the fun of doing your own bit of research.

I am aware that the times make it less likely, but the best situation in this context would be if we’d get a bit of ‘real’ winter, in the coming weeks. The combination of snow, frozen canals and the dishes mentioned above: it won’t get any more traditionally Dutch than that.

Enjoy your journey into the Dutch cuisine! 😋 ⛄ ⛸️

The Dutch and Time
The Story Behind Dutch Street Names
VISIT For More Tips, Trips, and Stories From Our Community