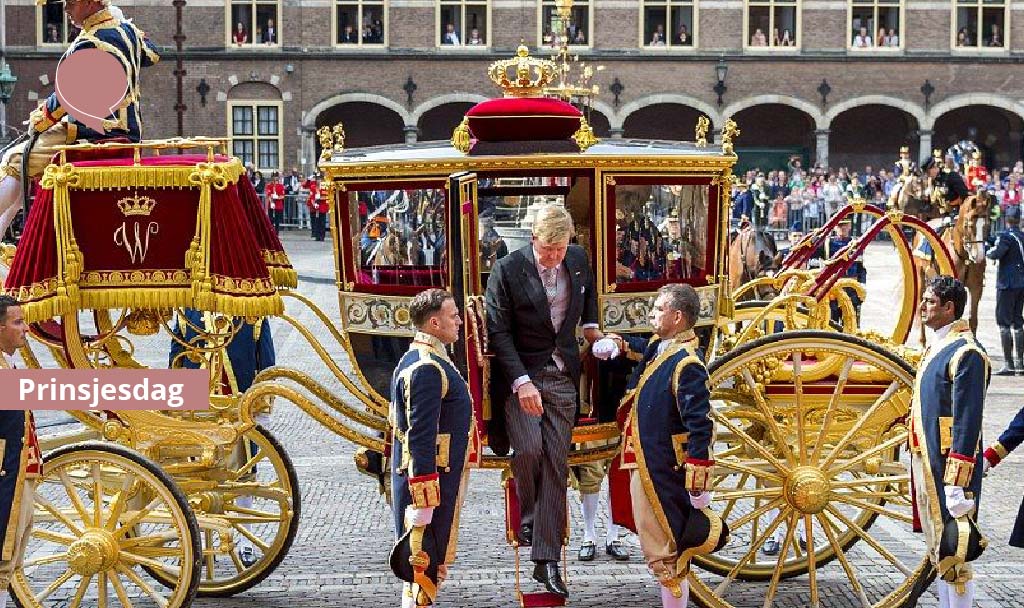 (Or: a quick look into the Dutch government and parliament).

Soon after the publication of this blog post, to be precise: on Tuesday, September 21st, such ‘pomp’ and tradition as still surrounds the Dutch parliament and royal house will be displayed once again during ‘Prinsjesdag’ (Little Prince’s Day). That day, that always takes place on the third Tuesday of September, marks the symbolic opening of the Dutch parliamentary year. In a speech to a joined assembly of both chambers of parliament, the reigning monarch reads aloud the government’s plans for the coming year. That annual speech is known as the ‘troonrede’ (‘speech from the throne’). The whole ceremony is broadcasted on national radio and television.

In this edition of the blog I will shine a little light on the tradition of Prinsjesdag. And I will use the opportunity to delve a bit into the government structure of the Netherlands. Maybe not the most ‘sexy’ topic imaginable, but this post will at least present you with some background info into how this little country is being run.

The name Prinsjesdag dates from long before the Netherlands were a parliamentary democracy, or even a monarchy. At the time the house of Orange, that did not yet provide the king or queen, but the steward of the then republic, was the topic of controversy. Some people were in favor of it and its role, others were against. And when one year a little prince was born, the occasion was used to boost the popularity of the house of Orange as a whole: let’s party and celebrate the little prince! A sort of ‘PR stunt’ before that term was ever coined. It was only much later that the term became attached to the opening of the parliamentary year.

During a ‘normal’ (meaning non-corona) Prinsjesdag, the king is driven to the session in ‘De gouden koets’, a gold plated carriage. That carriage was a gift from the city of Amsterdam at the start of the reign of queen Wilhelmina, the current king’s great-grandmother. That tour yearly attracts tens of thousands of spectators. After reading the speech, the king takes a tour through the city of the Hague, at the end of which he greets the people from the balcony of his palace. This year however, as was the case in 2020, the whole ceremony will have a more sober character, and the tour will not take place at all.

Please note that, although the monarch reads the speech, (s)he does not write it. Since the mid-nineteenth century, being the king or queen of the Netherlands is largely a ceremonial function. The monarch does not hold much formal power. In legal terms: the king is head of state, not head of government. It is the government that issues the laws- and sets the policies. And hence, the government writes the ‘troonrede’.

As an example: if the government proposes a law, and that law is approved by parliament, the monarch is essentially obliged to sign it into law. If (s)he does seriously oppose that particular law, and hence refuses to sign it, the only other legal option is simply to abdicate: to lay down the kingship or queenship.

For more info about the relation between the Dutch and their monarch, see the blog post I wrote in April, at the occasion of Koningsdag, the celebration of the king’s birthday.

Parliament
The Dutch parliament consists of the so called ‘chambers’, simply called the second chamber of parliament and the first chamber. The second chamber of parliament is politically the most relevant, and the most hectic of the two. It is there that day-to-day national politics largely take shape. The function of the second chamber is to ‘control’ the government and to amend its idea’s and proposals. And the members of this chamber have the right to propose new laws themselves, if certain conditions are met. Its counterparts in other countries are for instance the British House of Commons, and the US House of Representatives.

The (150) members of the second chamber are directly elected by the people, every four years. Sometimes more often, if the government doesn’t make it to the end of its four year term. In election time (and hopefully also outside that moment), political parties seek the favor of the voters, who cast their votes on election day. That election has a ‘one (wo)man one vote’ principle. There is not something like an electoral college in between the voters and this chamber, or a system of districts in which the winner of a district ‘takes all’. Every individual vote counts, at the national level.. There is also no ‘threshold’, below which a political party can’t enter parliament at all, as is the case in for instance Germany. Meaning that each party that gets at least 1/150th (0.66%) of the total votes cast, gets at least one seat in parliament. As a result, the recently elected Dutch second chamber of parliament consists of a record number of 18 political parties.

After election day, the largest elected party takes the initiative to see if a coalition with a workable majority in parliament can be created, with which to form a new government. In the diverse Dutch political landscape that usually takes at least 3 political parties, sometimes more. So, a lot of negotiations and bargaining usually accompanies the formation of a new government, as is clear for everyone who follows te current Dutch news.

The first chamber of parliament is somewhat further away from day to day politics. Its function is more reflective. It double checks a law agreed upon in the second chamber, for instance to see if it fully operates within the constitutions. Some of its counterparts are the UK House of Lords, and the US Senate (in Dutch it is actually called ‘de senaat’). Its (75) members are elected indirectly, though the provincial councils, who are in turn elected directly by the voters.

On the English website of the Dutch Kiesraad (the voting council) you can find an overview of all the elections held in our country, including who is and isn’t eligible to vote in which election. Many internationals will find themselves eligible to vote (and be a candidate) in the elections for the municipal council of the city they live in. The next time these elections will take place again is in March 2022.

Capital is not the seat of government
Many internationals wonder why the Dutch government resides in the Hague, while Amsterdam is the capital of the country. A rightful question: the Netherlands are the only western country in which the government does not reside in the capital. The situation has a historical background. In early times, whatever sort of governance the Dutch republic had, came from the Hague. In the early nineteenth century the Netherlands had a short period of French occupation. The then French king Louis Napoleon thought that Amsterdam had much more alure and status, and he made it the capital. After that French occupation ended, the Dutch government quickly moved back to the Hague, to the ‘Binnenhof’ castle complex where they had resided for so long. To this day historians are not completely sure why they didn’t also make the Hague the capital of the country, at that time.

Finally for now: as in some other countries, Dutch people sometimes worry if their cherished democracy isn’t slowly being partly turned into a ‘lobbycracy’. A system in which powerful lobbyists, representing the single interests of big industries and other rich parties, assert a lot of influence on the government’s decisions, out of sight of democratic transparency and control. I have decided that, bedsides making a bit of a somber end to this post, this question falls outside its scope. So, to count my blessings: the entire system largely seems to work!

The ‘Binnenhof’ in the Hague, seen from the north, and from the inside. The little tower on the left, (in the left picture) houses the work office of the prime minister.